A hangout for all things NBA. Join me as I discuss and analyze the latest stories in the league.

A Match Made in Heaven 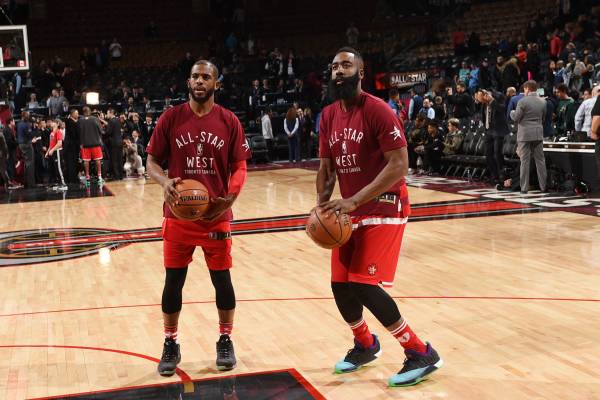 We've all heard the news by now. After locking Deandre Jordan in his home and convincing him to fall back on his max contract with the Dallas Mavericks, Chris Paul has abandoned him in LA after yet another disappointing post-season run. He will now suit up for the Houston Rockets where him and fellow All-NBA guard James Harden will form possibly the most formidable backcourt in the league.

CP3 is still arguably the best point guard in basketball, although that argument has gotten more difficult to make with the emergence and super-stardom of players like Curry, Westbrook, and John Wall (Yes, John Wall). Nonetheless, CP3 is fucking great. The Rockets now become the third second team to have two top-10 players on their roster. (Sorry, Cousins). Their core currently consists of Chris Paul, James Harden, Trevor Ariza, Ryan Anderson, Clint Cappela, and Eric Gordon.

Although I would have loved to see them keep Patrick Beverly, this was a great get. Rockets General Manager Daryl Morey has made a habit of making NBA off-seasons his stomping grounds. Always looking for the big move, you can rest assured that he is not done yet. A move like this is a giant green light, indicating that the Rockets are coming all-in for the championship. They are still missing about 3 pieces in my opinion though.

The first, and most important, is another tall, long, and athletic defensive-minded forward in the mold of Ariza. Another defensive body for small-ball lineups to counter GS's five-wings sets. The next is a backup big man and, hopefully, their first-round prospect Isaiah Hartenstein pans out. The last is a backup 1-guard, though admittedly this is just for the regular season purpose of keeping the stars fresh. Cap-space gymnastics aside, Paul Millsap, JaMychal Green, Thabo Sefalosha, Jeff Green, Shelvin Mack,  and Langston Galloway would all be great fits.

Alas, we reach the "Match Made in Heaven" part of this post. Mike D'Antoni. Two-time Coach of the Year, Mike D'Antoni. The fast-paced, run and gun offense. 1-5 pick-and-rolls maximally spaced with 3-point specialists on the perimeter. Mike D'Antoni who helped Steve Nash (at the same age CP3 currently is) become a back-to-back MVP; and then helped Harden reach the proverbial next-level as he finished as MVP runner-up this season. Yes we have seen what Mike can do when handed unselfish, great playmakers, with high basketball IQ to run an offense. We will now see what he can do with someone who is already a point-god.

People will say they are both high-usage players, but I believe that talent always finds a way to make it work. All-Star game squads never have a problem scoring. Lebron and Wade made it work. There is no reason these two guards, who are both much better shooters than Lebron and Wade, can't make this team work. (Though, defensively this team will struggle to contain juggernauts, as currently built.) Most importantly, they wanted to play together. Let's see what moves Morey makes in free agency, which is scheduled to begin on Saturday. The direction is set, and I believe the Rockets were missing a true leader in the mold of Chris Paul and his relentless competitive spirit.

Where to begin? Following James Harden's record-breaking contract extension ($228M), almost 3 billion dollars collectively has been dished out this summer. Speaking of Harden, he is well on his way to becoming a billionaire, with a b. Young hoopers around the world, become as good offensively as you possibly can, forget about defense. It's where the money is. This theory will be confirmed with next summer's free agency of Isaiah Thomas.

Nine days into free agency, we are finally getting a clearer picture on what rosters will look like this upcoming season. I've been saying this for a while, the league is deep as fuck. Young teams, and bottom-10 teams have some serious talent (potential, in some cases) these days. For example the Kings (Fox, Heild, Jackson, Skal, Giles, Hill, ZBO), the Suns (Bledsoe, Booker, Jackson, Chris, Bender, Len, Warren) or the Lakrers (Ball, Ingram, Clarkson, Randle, Nance, Deng, Lopez). This is apparent when you run a draft in NBA 2k and you're in the 5th round and players like Harrison Barnes are still available. Exaggerating, but you get my point.

There are still quite a few names in FA that I am curious about, because they are great rotation players. These are Kentavious Caldwell Pope, JaMychal Green, CJ Miles and Nerlens Noel. The Pope case is especially interesting because Detroit has allowed him to become an unrestricted FA; though the timing isn't great because there are so few teams with cap space remaining. Brooklyn and the Lakers are two teams I suspect will throw money towards obtaining his services.

Other than that, there are some servicable vets, especially defenders on the wing , that should be taking minimums to compete for championships. I'm thinking about players like Thabo Sefalosha, Luc Mbah A Moute and even Tony Allen. Look for Cleveland, OKC and Houston to snag these players. That's it for today, I will round-up with what I thought to be the most impactful moves this summer.

P.S.S. Five years ago Rajon Rondo & Derrick Rose were widely considered the two best point guards in the world, it is unfortunate to see how things have changed. Both are still seeking employment.

Lebron James. Draymond Green. The Greek Freak. Harrison Barnes. Carmelo Anthony. Tobias Harris. Paul Millsap. Justise Winslow. Jae Crowder. Ben Simmons. Al Farouq Aminu. Kevin Durant. Demarre Carrol. Luol Deng. So on and so forth. The list of players either starting at the 4, or spending the majority of their minutes at the 4 are a far cry from what we would call "traditional bigs". The small ball movement is alive and well in the NBA as we live out the repurcussions of the recent uber-success of teams like the Warriors and Celtics of recent years. All but one of the players listed above fall short of being 6"10. Most of them can shoot the long ball and initiate/run an offense. None of them are setting screens. Couple this with the fact that traditional 4-men such as Al Horford, Kevin Love, Myles Turner, Kristaps, Dirk, Demarcus Cousins, Karl Towns, Nene and others will now lace them up or spend the majority of their minutes at C, and we have come full circle.

These skilled forwards of past-day now occupy the sole big-man position on the floor. We trend closer and faster towards a league where skill-less bigs won't have a career. Size and length alone cannot guarantee playing time. To make it as a big in today's game you either require the ball skills and all-around deftness as the aforementioned bigs, or the type of defensive impact, efficiency and athleticism displayed by Rudy Gobert, Deandre Jordan etc. To be simply a post-scoring center, albeit a great one, who lacks in the defense/shooting departments is to be a bench player these days. See: Greg Monroe, Enes Kanter, Al Jefferson, Jahlil Okafor etc. I do believe players like Niko Vucevic and Jonas Valanciunas will soon find themselves in these roles. Similarly, the (very) few remaining starting 4s who can be truly called bigs, will soon be full-times centers. Players like Lamarcus Aldridge, Kristaps Porzingis and Anthony Davis.

But are we really getting smaller all the way through? This is a misconception and I point to the failed experiments of the Pheonix Suns 3-guard lineups, and the divorces of udnersized backcourts like the 2016-2017 Boston Celtics. Coupled with the small-ball revolution happening with forwards and centers, we have quite the opposite happening with the guard positions. Today we have more 6"4 and taller point guards than at any point in NBA history. Elfrid Payton, John Wall, Markelle Fultz, Frank Ntkilina, Malcolm Brogdon, Kris Dunn, Dante Exum, Dangello Russel, Dejounte Murray, Carter Williams, Shaun Livingston, Marcus Smart, Emmanual Mudiay, Darron Fox, Russel Westbrook, Jrue Holiday, Delon Wright etc.... the prototype is alive and thriving. The NBA is meeting in the middle. Guards are bigger, longer, faster and more athletic than ever. Centers are faster and more skilled than ever before; Tristan Thompsons can no longer start in this league. Wings occupy the landscape in between with the ballskills of guards and defensive impact of traditional bigs.