I have practiced some yogic exercises for several years. Recently, I have been thinking of deepening my practice. I had a general idea of what yoga is, but decided to do some research on the subject before proceeding. People normally write about a subject once they are (or believe they are) "experts" on it. I will write about yoga not from knowing, for I realized I know nothing, but from learning and as I learn. As I take this trip, I welcome you to join me, so that together we can understand why this fabulous ancient method is immensely relevant today.

Some researchers are saying that Yoga is more than 10,000 years old and even as old as 15,000 years. The accepted view is that humans were still hunter gatherers at this time which raises the question: how could they develop such advanced methods of self-inner, knowledge and discipline?

The discovery of many sites around the world is considered by some scientists to be evidence of pre-historic civilizations with a high degree of advancement going back much further than currently accepted. One example is Gobekli Tepe in Turkey, an ancient temple proved by carbon dating to be at least 11,000 years old. As more of these sites are studied they could prove that there was indeed a very advanced civilization prior to the last Ice Age and the beginnings of Yoga could have been developed by such civilization.

The most accepted view of the origins of Yoga claims that it was developed about 5,000 years ago by the Indus-Sarasvati civilizations in Northern India. Shiva was believed to be the first yogi also known as Adiyogi. Shiva poured his profound knowledge into the legendary “seven sages”. These sages carried these powerful yoga physical, mental and spiritual techniques to different parts of the world.

However back it goes in time, Yoga offers a long and rich history and it is generally agreed that it can be divided into four main periods of development: Vedic Yoga Pre-classical Yoga Classical Yoga Postclassical Yoga 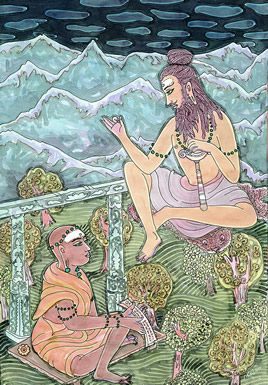 Yogic teachings are first found in the Rig-Veda dating back roughly to 1700-1100 BCE. The Rig-Veda is the most important and the oldest volume of the four Vedas. The Vedas are the sacred writings of ancient India and considered to be the scriptures of Hinduism. The writings contain hymns, mantras and rituals recognizing one universal Divine Being and One Truth.

Tradition suggests that the teachings in the Vedas were revealed to the Rishis (sages) through intense meditation. Vedic Yoga teachings are a comprehensive set of physical, mental and spiritual practices addressing all of life and all of nature. These complex and many-sided practices were designed to enable one to realize the all-inclusive consciousness that is our true nature.

The maxims contained in the Vedas have stood the test of time and are considered a respected source of wisdom for mankind even to this day. Initially the Vedas were only transmitted orally from one generation to the next until they were eventually written in Sanskrit. This ancient Indian language continues to be used as a ceremonial language in Hindu religious rituals and Buddhist practices in the form of hyms and chants.

The Rig-Veda with its thousand plus hymns is one of the longest Yogic texts and the first written teachings of Yoga. The Sanskrit word “Veda” means knowledge, while “Rig” means praise. Thus the Rig-Veda is a collection of hymns that praise a higher power.

Sometime between the second and the fourth century, Patanjali composed the Yoga Sutras, the most authentic and systematic presentation of yoga. Classical Yoga is also referred as Raja Yoga.

The Yoga Sutras is composed of 195 aphorisms (sutras) or words of wisdom. They discuss posture, breathing, meditation and correct living. Through the centuries commentaries on the sutras have been published by many yoga teachers and academics seeking to clarify some issues. The sutras are written in Sanskrit and to this day the meaning of some phrases remains a matter of dispute.

Beyond a few legends nothing is known for certain about the sage Patanjali. Anonymity is typical of the great sages of ancient India. They refuse to take credit for themselves and recognize that their teachings are the continuation of older teachings.

Patanjali organized the practice of Yoga into an “eight limbed path” containing steps and stages towards “enlightenment”. We will explore each of the limbs in a later article; they are:

During the Vedic and the Classical period yoga practices and teachings were centered on the realm of the spiritual and the ultimate goal of merging into the divine energy.

A few centuries after Patanjali’s Yoga-Sutra, yoga masters developed practices aimed at the rejuvenation of the body. Previous masters paid less attention to the physical body. Many types and schools of yoga flourished exploring ways to energize, heal and cleanse the body as well as practices to prolong its life. The physical body reclaimed a new importance as the temple of the immortal spirit.

Yoga’s aim in this period encompasses the acceptance and alignment of all dimensions of existence: body, mind and spirit. The exploration of the physical-mental-spiritual connection led to the creation of Hatha Yoga.

The term Hatha was first used in the 12th century; it means “forceful” in Sanskrit. Some scholars believe that the reason this term was used is due to the fact that these new practices must have seemed strong in comparison to the more subtle disciplines of meditation and contemplation practiced at the time.

There are many schools and variations of Hatha Yoga. In the West it is mostly understood as physical asanas only. This is not the case in the Indian and Tibetan traditions where besides being a sophisticated physical exercise system, Hatha Yoga also integrates meditation, diet, cleansing and breathing exercises.