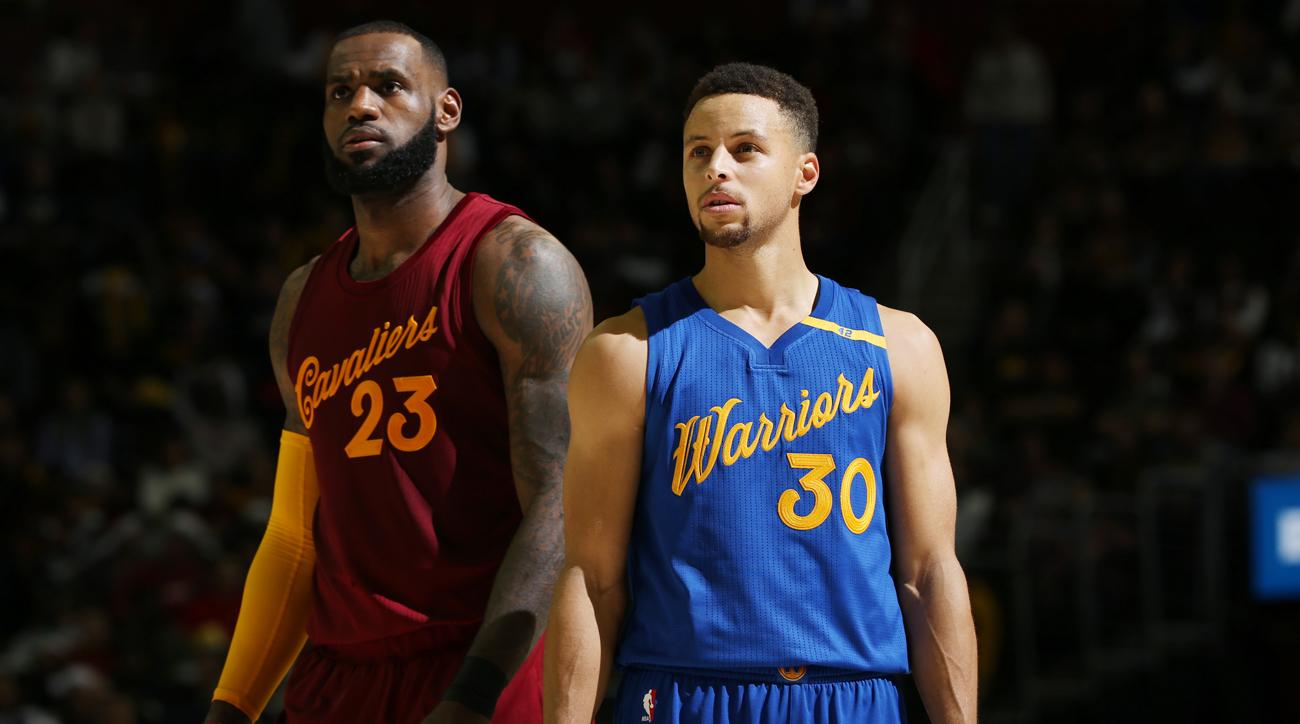 The date is set. In less than a week now hoops fans will be treated to the grudge match we've been waiting for all year. The tie-breaker. 3 MVPS, 7 All-Stars, these are my game notes.

Kevin Durant was superb. Steph Curry was himself again, and himself is a two-time MVP. This was a tough squad for any team to handle this year, let alone the 22-ranked defense in the NBA belonging the the Cavaliers. So much talk was made of Golden State's offense before the game, but on Thursday night it was their switch-heavy defensive schemes on display. Durant only added another 6"11 frame and athletic body to the collection of things to throw at James. Between Klay, Igoudala, Durant and Green, the Warriors offer a plethora different looks at the king. Speed, size, length, height and toughness led to 8 turnovers for the King. While Jame's stat-line was its impressive self ( highlighted by 15 rebounds) , it had a couple of red-flags. The aforementioned 8 turnovers, 4 personal fouls, and 4 free-throw misses. These are just some of the things that must be addressed in Game 2 if James is to impose his typical impact on post-season basketball games. James has been heralded for his incredible basketball IQ, and ability to adapt and adjust to teams during a series. The Cavs will rely on their leader continuing to justify these legends , and on their defensive adjustments for any chance of stealing Game 2. Also, their role-players must step up. The supporting cast was non-existent in Game 1, and this goes especially for the bench. Tristan Thompson put in a doughnut with 4 boards and 2 personal fouls, which is simply inexcusable for the "energy-guy", who also is tops in the league in offensive rebounding statistics. He needs to find a way to become a factor. The Cavs need more than James and Irving to reach their ultimate goal. I DO expect D-Will, Korver, TT and the supporting cast to play better in Game 2, simply because they cannot play much worse than they did. They also need to continue to dominate the boards (James 15, Love 21) and the paint; as this is a squad without Bogut & Ezeli. As for the Warriors, not much can be said. They played the perfect Game 1 on both sides of the ball, & tied an NBA record for fewest turnovers in a Finals game (4). They must continue to capitalize on their strengths and on what worked in Game 1. Ball movement, off-ball movement, and speeding the game up. The way they were able to make plays off the catch beyond the arc was incredible. Cleaveland's overreaction to the 3-ball led to one too many wide open dunks. Overall, if the Cavs keep daring Zaza to take wide-open dunks/layups, the Warriors will continue to strive. The biggest challenge for the Warriors at this point will be simply maintaining the proper mindset. Keep the sense of urgency in every game, and continue to execute like they know they can. If they can hold on to their identity as a unit, they look to be in good favor. And Kevin Durant, 3 wins away from the thing he wants most on the planet, is a lethal entity who looks absolutely ready to lead them there. Game 1 MVP: Kevin Durant (38 pts, 9 rebounds, 8 assists, 0 turnovers, 54/50 fg/3p % split) Game 2 Prediction: Cleveland bounces back for a narrow victory, and ties the series.

Lebron James is having trouble securing wins against Team USA. Granted, he is playing as good as he ever has. This one was tough. Cleveland played a much cleaner game (9 turnovers, 20 steals) and forced the issue on the Warriors. The Big 3 made their presence felt, Lebron was fantastic, Love was good, and although Irving missed some shots he was a stable presence in the offense. JR Smith, TT and the supporting cast are still nowhere to be found. This is a trend that cannot continue at home if the Cavs want to avoid a sweep at this point. The role players must step up. Already, Coach Lue is considering starting Iman Shumpert for Game 3 (source www.bleacherreport.com). This wouldn't be a bad thing considering he was the only other Cav to have a positive impact thus far. It might not show in the stat sheet, but Shump played with an edge, and his aggression, on both sides of the floor, was a welcome sight. He also provides a tenacious, strong body to throw at Durant. The Cavs must continue to execute for 48 complete minutes if they want to sniff any victories at this point. (27 assists to 9 turnovers, 45 fg%). They cannot afford to lose the rebounding battle against this smaller Golden State team (see Curry 10 rebounds). As for the Warriors, they continued to play their game and streamline easy bucket opportunities. They play off the strong side help and make the right passes. Durant and Curry were hitting on all cylinders once again, but Klay Thompson proved to be the difference maker in Game 2. Klay caught fire for 8/12 fgs and posted a team high +24. He also continued his excellent defensive effort on both Irving and James. Coach Steve Kerr rolled with Kevin Durant at Center, when Green got into some foul trouble. This was a scary sighting and a giant mismatch for whoever tried to guard him. Durant ended with 13 rebounds and 5 blocks, continuing his dominant paint presence on both sides of the ball. Game 2 MVP: Lebron James (29 points, 11 rebounds, 14 assists, 3 steals, 1 block, 12/18 fg) ties Magic Johnson for most triple doubles in NBA Finals history. (If not for this feat. this honor would have gone to Kevin Durant once again) Game 3 Prediction: Golden State is playing the best basketball I have ever seen, and will probably roast me again for this prediction, but the Cavs take 1 game in front of their home crowd. Kyrie Irving has a huge night.

First and foremost I apologize for missing Game 3 notes, I was out for personal reasons and it was a rough week. That said, the Cavaliers were absolutely stunned. They did what they had to do, limited the turnovers we spoke about, and positioned themselves to win the game. Durant wasn't having any of this though, and he put a dagger in the game with a pull-up 3 pointer to cap off a scoreless 3 minutes for the Cavs, wherein the Warriors took the game.

Moving on to Game 4, Lebron and his boys came out swinging. A 49 point first quarter added to a record-breaking NBA Finals score for a half. The Cavs came out with the energy required to win one at home, played smothering defense and buried 21 3-pointers.

Kyrie Irving was as agressive as we've ever seen him and added to his impressive record in elimination games with a 40-point night that saw him drain seven 3-pointers. The supporting cast finally woke up as Love and Smith combinred for 11 more 3's and Tristan Thompson had his best all around game with 10 rebounds and 5 assists. Even the corpse of Deron Williams made a basket in Game 4.

The Warriors cooled off a little bit and they never seemed to match Cleveland's energy or even get close to coming back. Now that the 3-1 murmurs have returned, they should have more than enough motivation, and energy to finish this series at home tonight.

It will take another super-human effort to beat this Warrior team in Oakland tonight, given the sense of urgency they should have. Everybody is healthy, nobody is suspended and both teams have had a 3 day rest. Cleveland has matched Golden State in the previous two games and shown that they can play with this team. Unfortunately for them, they lost one of those games. And those last 3 minutes of Game 3 could very well prove to be the diffference in this series. Also, it may be a bad sign that the Cavaliers had to break an NBA record just to beat this team once. Though, the fact that they did in fact break the record, could say more about them.

Warriors helped me not put in a doughnut in my series predictions. The job is done. The Warriors have their second championship in 3 years and Kevin Durant is your Finals MVP. Curry was great. Lebron James and Kevin Durant were exceptional. There was simply no stopping KD, especially after a Game 4 scare, when this close to his ultimate goal. He came out swinging and left a champion.

Andre Igoudala was once again fantastic (2015 Finals MVP) and arguably the third most important player on the team. He led the Warriors in +/- throughout the entire series and put in 20 points, 4 rebounds, and 3 assists on 9/14 shooting in Game 5. 40 minutes per game of Igoudala defense is also nothing to look past. In my opinion it is vital that the Warriors re-sign him this offseason (unrestricted FA), and from the sound of it they feel the same way. It will take some cap-space gymnastics, and Livingston will most likely be gone, but it is possible.

The Cavaliers came to fight. Their energy and sense of urgency was apparent, but ultimately it was not enough. JR Smith and TT played well together again, both scoring at least 15 points on 75% shooting. JR Smith especially caught fire draining 7/8 3-point shots for 25 points. Their contributions were too little, too late though. Cleveland simply does not have enough defenders to handle this Warrior team's record breaking firepower. Nor does it have enough offense to go toe-to-toe with them. The bench mob once again was extremely dissapointing combining for 7 points (of which Iman & Deron had 0). This brings us to Kevin Love.

The Kevin Love discussion has to be had. Minutes after the loss, trade rumors were already flooding Twitter. Though his flat numbers seem fine(16ppg, 11rpg, 2spb, 1apg, 1bpg) he shot just 38% throughout the series. Once again he was ineffective offensively vs this Warrior's team. This is a dissapointment when it happens year after year, and it comes from a maxed-out All-Star player. Especially when he is capable of playing the 5 position where his shooting will be counted on to spread the floor and paint protection.

Kyrie Irving played a solid game, though he slammed his knee on the court in the first-half. This was the same knee he got surgically repaired, and it seemed to be bothering him as he was seen getting treatment throughout the timeouts. Unfortunately, whether this affected him or not will never matter. He gave an absolutely inspiring post-game press conference though, which I highly recommend.

The Finals are over. Steph Curry is a two-time MVP and now has two rings. Kevin Durant finally achieved the largest goal of his life. He finished what he started six years ago in Oklahoma vs the Miami Heat. These two entering their age-29 seasons next year show no signs of slowing down. The window is open for 3-5 years. Cleveland and the rest of the NBA has some figuring out to do this summer, if not we can expect more of the same from this Dynasty.